For those of you who don’t know, Tour de Fleece is the spinner’s version of Tour de France.  Every year, spinners worldwide pull out wheels and spindles and as the fellows crank their cycles over mountain and flat, the spinners turn pounds of fiber into yarn.  Their goals vary, and are very dependent upon the individual.  For some, simply spinning a few minutes every day of the Tour is a challenge.  For others, it may be to spin a particular fiber, or a particular yarn.  For others, it may be a matter of getting through as much fiber as humanly possible.

Regardless of the goals, it’s fascinating to watch what folks accomplish each day, to hear the dugout chatter calling to the other players, and to see the sense of camaraderie which develops during the ride.

It is always a joy—and quite frankly, a blast.

For my part, things were rather chaotic and I was juggling spinning around work and travel prep.  I’m finally landed in one place long enough that I can update the blog to show what I’ve done, but it honestly isn’t a lot. 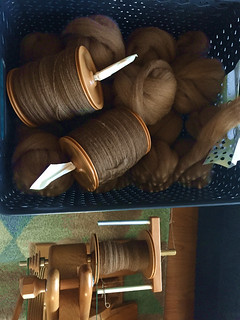 I’m slowly working my way through a Bond fleece from Gleason’s flock.  The two bobbins in the basket are numbers 3 and 4, and the bobbin on the Rose is bobbin #5.  I’m guessing there are enough combed nests left in the basket to fill that fifth bobbin plus a good part of one more, so I should end up with 6, or thereabouts.

However, it will all have to wait until I get back from being on the road—and then we’ll see if I can knock it out sooner rather than later and get it plied.