That phrase has always bothered me a tiny bit.  It doesn’t allow for the interval between the ending of one and the beginning of the other, and that has always seemed sort of a sad thing.  There should be a pause between the changing of the guard, a chance to recognize that the old has passed away and the new is coming in.  In reality, however, I suspect that very little of life works that way.  And perhaps I’m just feeling it particularly now.

2014 has been a hellish year.  It has been full of illness, stress, chaos, and sorrow.  DH’s mother died in June, and he followed entirely unexpectedly and far far too young in November.  The November and December holidays have been wells of darkness, and I’m not looking forward to the coming couple of weeks.  But in just a few hours, the books on 2014 will officially be closed; the king will be dead.

And just after that, 2015 will start with a fresh page.  Long live the king.

I’ll be honest and say that I’m not particularly looking forward to 2015.  I’m not expecting it to be a good year.  I’m expecting it to be a year of finding footing, regaining some semblance of balance, and figuring out a lot of things which weren’t even on the radar.  A year of adjusting to something which simply shouldn’t be.  A survival year.  Nothing more.  I suppose that sounds rather grim, but it is, if nothing else, realistic.  And I frankly think that if I can manage that, then I’ll have done well.

So, then, on this last day of 2014 and before 2015 rings that opening bell, perhaps it makes sense that there is little or no pause between the end of one and the start of the other.  It is, after all, just a continuation.

This is Enchanted Knoll Farm’s “Timekeeper” from May 2013. It’s a grief yarn, which means that you spin it during the absolute worst life has to offer–and it shows. It’s as inconsistent as can be in both grist and twist, short of being a true thick-thin. I saw at least one accidental eyelash when I was skeining it off, and there may even be one or two places where I began plying in the wrong direction. Otherwise, some areas are hard with enough twist to be brittle, others are barely held together, and some are actually rather normal.

This is a beautiful colorway and one of my favorite fibers (a sw Merino/Tencel blend), and the yarn doesn’t do it a fraction of the justice it deserves, or which I’d planned. But somehow it’s appropriate that it is the one which closes out the year. And this is one yarn which will not be gifted away. There are a total of 1574 yards between the two skeins, so there should be enough for something pretty and comforting. 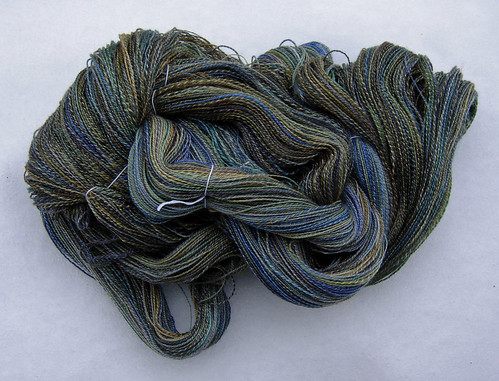 Trond would have actually liked it.

8 thoughts on “The king is dead, long live the king”