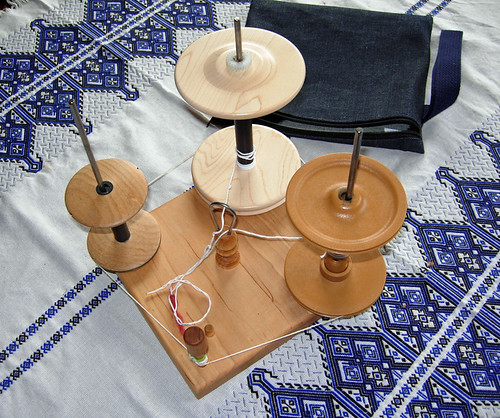 Produced by Nancy’s Knit Knacks, this is, admittedly, a clever little lazy kate and it does a lovely job of a lot of things.  One of the positive aspects to it is that it all breaks down and slips into that denim bag at the back so it’s portable like nobody’s business.  The base is smooth, simple, and stable.  The rods are about 5mm posts and fit a tremendous variety of bobbins.  In short, it works.

In my experience, it has only two drawbacks (unless you want a kate to handle more than 3 bobbins).  The first is that thread guide.  See the loop in the middle of the base?  That.  It is, quite frankly, rather useless.  The problem is that it forces all the threads to come into a single location nearly immediately.  Ideally, whenever you move your yarn, you want to do it over a bit of a distance, and there’s no room here to allow you to untangle a single if it gets caught on a neighbor.  That loop actually causes that to happen sooner rather than later.  If the loop were actually a squarish bracket at the front corner of the base, or each bobbin had its own loop, then it would work better.  But in this case, the central thread guide is, in my own experience, more problematic than helpful.  The solution, however, is simple:  you just don’t put it in place.

Admittedly a lot of that risk of singles tangling or catching on one another is reduced if you set the singles under fairly solid tension, but therein lies a second problem.  Adding tension is fine if you’re dealing with a smallish bobbin, but in most cases, it isn’t necessary simply because of the way the kate is arranged.  The bobbins rest on their ends, which means that the entire weight of the bobbin and its contents is already weighing against your single.  If you’re dealing with a larger bobbin—such as that WW bobbin for the Hansen miniSpinner in the middle which can hold a good 10 ounces—then you’re looking at a lot of weight (and therefore a lot of tension) on your single.  In other words, I don’t use the tensioning device, either.  Generally speaking, the weight of the bobbin is enough to maintain the tension on the single and avoid the problems that comes with the bobbin spinning too loosely or else backspinning.

In short, I use the kate all the time, but I prefer the Majacraft kate for thin singles if the bobbin will fit it.  If not, then I rig the kate so that it rests on a tilt if possible, thus minimizing the weight factor. I will ultimately replace the Maja kate with a vertical kate, and the Katie-A-Go-Go will be reserved for travel needs, something for which it is supremely suited.